'Straight out of House of Cards'

MANCHESTER, N.H. — It’s not just the chaos in Iowa or the newly bitter tone of the campaign in New Hampshire that’s to blame for the angst gripping the Democratic Party in recent days.

It’s the realization that the primary on Tuesday may do nothing to resolve the discord.

Joe Biden and Pete Buttigieg, two centrists who are newly mauling each other, will move on to Nevada and South Carolina. So will Bernie Sanders, the frontrunner in New Hampshire, and Elizabeth Warren. Following the Iowa caucuses, Amy Klobuchar sent staffers to New Hampshire and Nevada.

The billionaires aren’t going anywhere, either: Michael Bloomberg will confront all of those candidates on Super Tuesday, and Tom Steyer is polling well enough in South Carolina to disrupt the race there.

“It’s straight out of House of Cards or Veep, just the level of uncertainty [in] contest after contest if we don’t have a verdict,” said Jay Surdukowski, a New Hampshire-based attorney and Democratic activist who co-chaired Martin O’Malley’s 2016 presidential campaign in the state. “It could be a jump ball for months.”

Traditionally, Iowa and New Hampshire have culled unwieldy Democratic fields. This year, they are only adding to the muddle. And as the candidates swept across the icy roads of New Hampshire, Democrats began to settle in for a slog.

“Everybody’s in it as long as they can hang,” said state Sen. Lou D’Allesandro, a Biden supporter and an influential figure in New Hampshire’s primary politics. He called the possibility of a contested convention “more likely” than it had been only several weeks ago.

Even Ray Buckley, chairman of the New Hampshire Democratic Party, suggested a winnowing of candidates here is unlikely. While fielding questions about a possible recount in New Hampshire if the election Tuesday is close, Buckley said at a Bloomberg News event that after the Iowa caucus debacle, more party officials from around the country are preparing to travel to Nevada, South Carolina and other later states to help with their elections and caucuses.

The primary is now in a state of “mumbo-jumbo,” said Robert Wolf, a venture capitalist and influential Democratic donor who raised money for and advised former President Barack Obama.

"This wasn’t a great week for the party,” Wolf said, adding that he fears the effects of a non-consolidated primary could linger.

The uneasiness surrounding the nominating contest has been exacerbated by a sharpening of the campaign’s edges in New Hampshire.

Over the weekend, Biden, hobbled coming out of Iowa, ripped into Buttigieg. “This guy’s not Barack Obama,” the former vice president declared. He also released an ad mocking the gravity of Buttigieg’s experience in South Bend, Ind., such as installing “decorative lights under bridges” and licensing regulations for pet chip scanners — the kind of local government experience that Buttigieg has said politicians should not discount.

Biden says Buttigieg is ‘not a Barack Obama’

Buttigieg responded by portraying Biden as a creature of Washington. Steyer, meanwhile, aired ads attacking them both, Biden as an “insider” and Buttigieg as an “untested newcomer.”

Steyer, whose strong polling in South Carolina has startled many Democrats, on Friday challenged Biden to disavow remarks by a surrogate who suggested Steyer bought the support of the chair of South Carolina’s Legislative Black Caucus. He has not ruled out spending money on ads criticizing Biden’s record on race in an attempt to soften Biden’s overwhelming support among black voters.

The antagonism has begun to erode the persuasiveness of Democrats’ campaign-long calls for unity ahead of a general election against Donald Trump. And the disorder in the primary was accentuated by its contrast with one of the Republican president’s best weeks.

Trump thrilled Republicans with his State of the Union theatrics, was acquitted in the impeachment trial and posted a highest-ever 49 percent approval rating in the latest Gallup survey. Trump will once again insert himself into the primary campaign on Monday, when he hosts a rally in Manchester after staging a similar event in Iowa ahead of the caucuses.

“This week didn’t feel good. There’s no doubt about that. It didn’t feel good from an ‘our party’ standpoint,” said Amanda Renteria, national political director of Hillary Clinton’s 2016 campaign.

“I think Iowa just spooked people again, not about any one candidate, but spooked them about the process in general," she said.

If New Hampshire offers any clarity to the primary, it is likely to come only as a matter of degree.

Many moderate Democrats are closely watching Warren’s performance in New Hampshire, fearful that if the progressive senator falls too far behind after a third-place showing in Iowa, her supporters may eventually rally to Sanders, strengthening his candidacy. 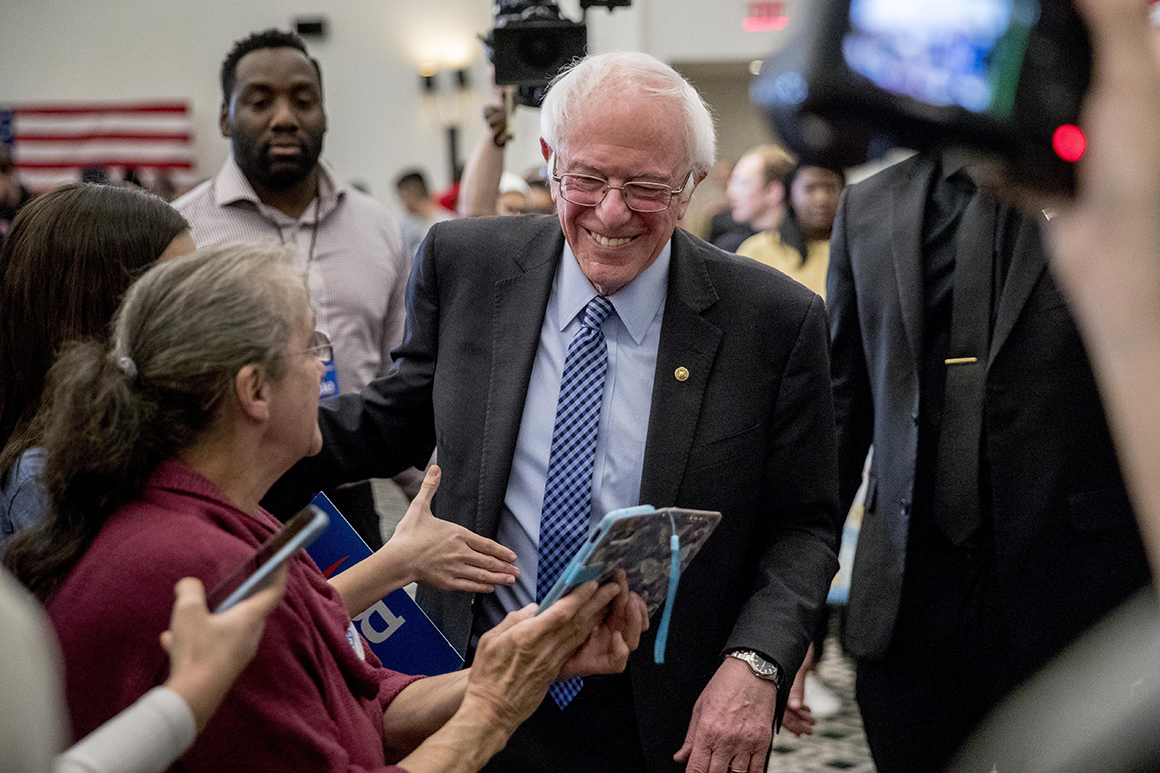 “If it’s Sanders against the field, it’s a problem,” said Matt Bennett, a veteran of the 2004 presidential campaign and co-founder of the center-left group Third Way.

The durability of multiple moderate candidates could be problematic for moderates, as well.

Buttigieg performed well in Iowa and is surging in New Hampshire, but he has no demonstrated support among voters of color in the two states that come next, Nevada and South Carolina.

And in New Hampshire, Biden has emerged as the inverse case to Buttigieg. He all but wrote off the state during Friday’s debate. But his demise, if it comes soon, likely won’t arrive until South Carolina, where he remains ahead.

“It defies traditional logic,” said Lewis, a Sanders supporter. “But nothing about this primary has been traditional … Everything’s just fractured.”